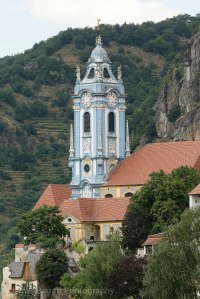 A view across the Danube at the lush Wachau Valley, known for its vineyards and notable wines.
http://www.domaene-wachau.at/Duernstein.338.0.html?&L=2

In the 13th and 14th centuries the town wall with towers and gates was built. This is the entrance to the town which has only one street.

From December 1192 to March 1193 the English King Richard the Lionheart was imprisoned at Dürnstein. The famous English king is said to have ridiculed the Austrian flag on the third Crusade. Returning home in disguise through Austria, he was recognized, captured and sent to the Dürnstein fortress, where he remained locked up until being freed by his faithful vassal, the minstrel Blondel. Remains of that castle is visible at the top of the hill.

In the 16th century most of these houses were built, which still determine the character of the town.

Entrance to church from the courtyard.
http://en.wikipedia.org/wiki/Dürnstein

We were treated to a wine tasting at a Heuringer which is owner run, established for tasting of the owner’s wine production, and often accompanied by a limited food menu. The varietals found in this area are Riesling, Grüner Veltliner, Neuburger Muscat, Blauer Portugieser, Blauer Zweigel. This young woman was our server.